Sometimes weekends sneak up on me. I hate doing the same old thing, so sometimes, on a whim, I’ll point to somewhere on a map of Thailand, throw some gear into a bag, and hit the bus station. One such weekend, I got Scott and John to join me as I ventured to a new area of central Thailand I was interested in – the province of Petchabun. I picked a national park called Nam Nao, because apparently wildlife sightings are common, especially elephants. Spoiler alert: did not see. Nada. My no-plan plan sort of blew up in my face…and to make matters worse, I had two others to worry about – are they having a good time?? Are they going to shun me as a friend because of all my empty promises?? But, in the end, we came back with some good stories and weary bodies, and I really can’t ask for too much more than that. And Scott and John are still speaking to me, so…success!

First problem: the “four hour” bus ride took upwards of seven.
Then, we arrived in Lom Sak pretty late at night, and the only accommodation we could find was…less than ideal. No, scratch that – it was straight up frightening. Upon seeing a photo, my friend Andy back home said it looked like the hotel room Tom Hanks gets in Big when he goes to the city to escape his mom (hilarious reference). When I saw it, my first thoughts were “someone has definitely been murdered here” and “I’m leaving here with a disease, if I leave at all.” John stepped in one area of the room and ants literally exploded from the floorboard. We fought over the one plastic chair to sit in instead of the sagging mattress – sleep did not come easy for anyone.
My plan included personal motorbikes for each of us to get in and out of the park, but Lom Sak is tiny and lacks a motorbike rental place – I think I asked every person in town, to no avail.
We ended up having to wait around for another bus that kind of just rolls past the entrance of the park and you jump out. Then walk and hope a kind pickup driver will let you bum a ride. So far this trip had been a bunch of sitting and waiting around – two things I am really not very good at. My patience stores were running low…

I was chomping at the bit to get out onto the trails when we arrived in the park, but I hadn’t even had a moment to take in our surroundings and the boys had ordered a smattering of Isaan food. We waited some more, then they ate as I chose our route for the day. The end would find us at a rocky sunset overlook. In between, we would pass through thick, lush jungle, bamboo forests, dry, arid grasslands, and even a large area of pine trees. 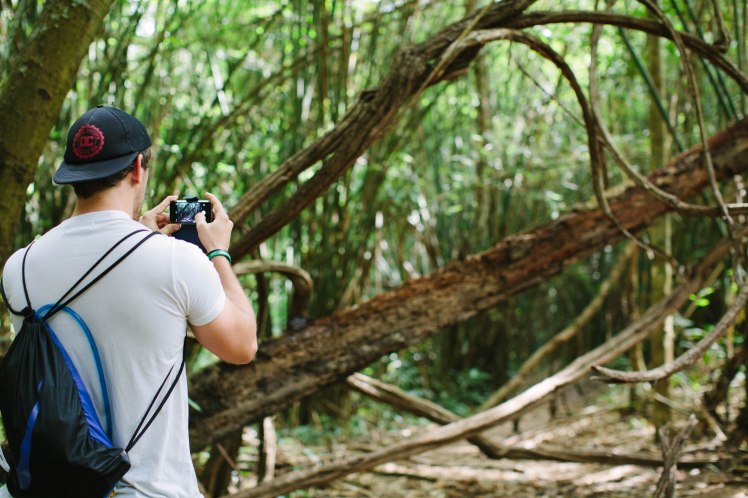 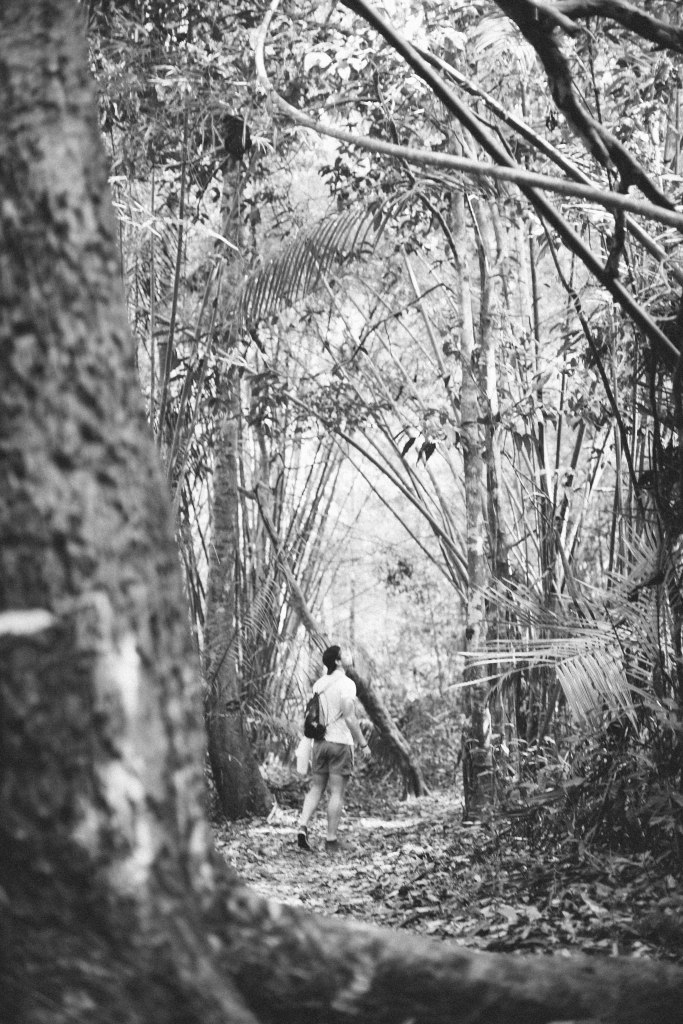 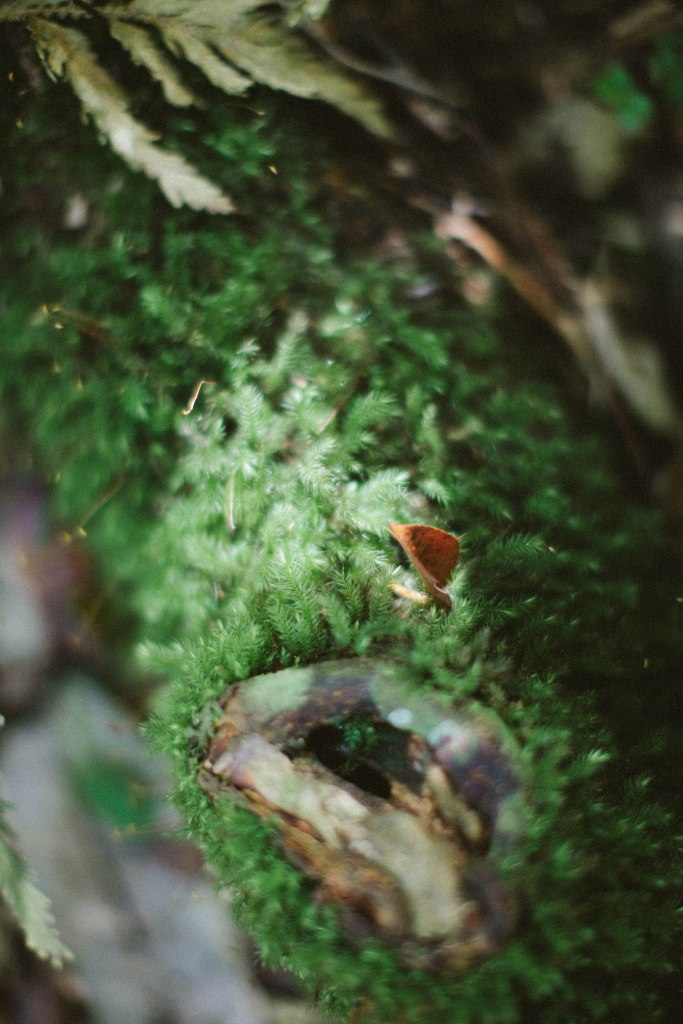 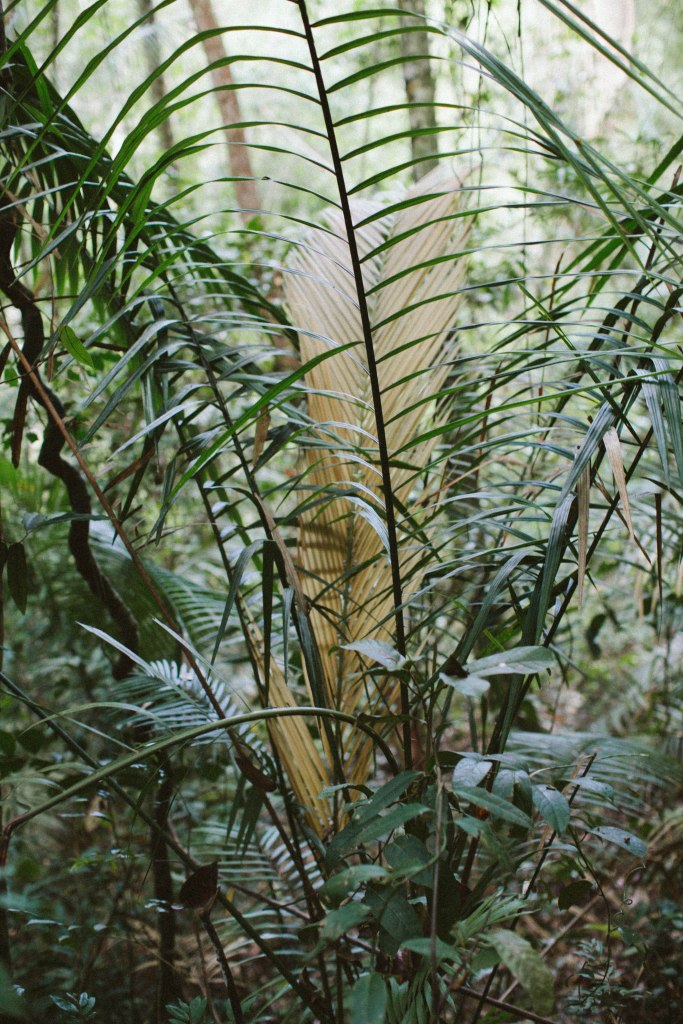 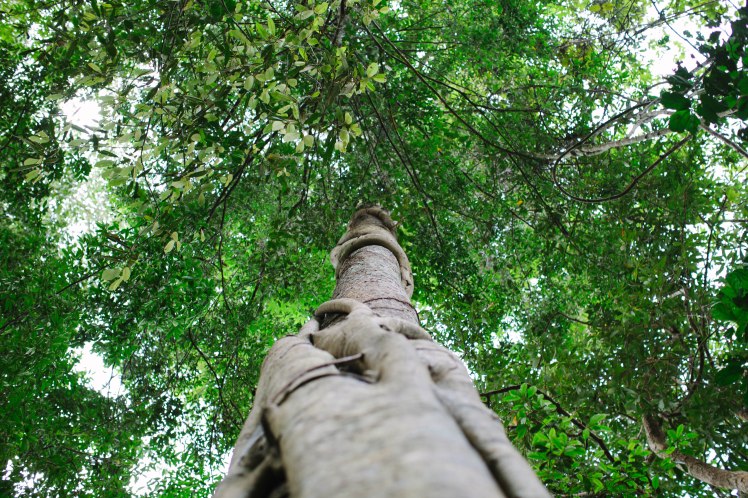 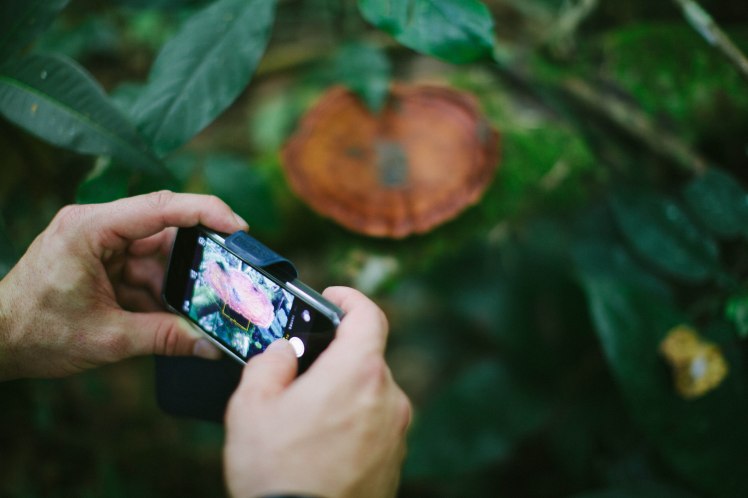 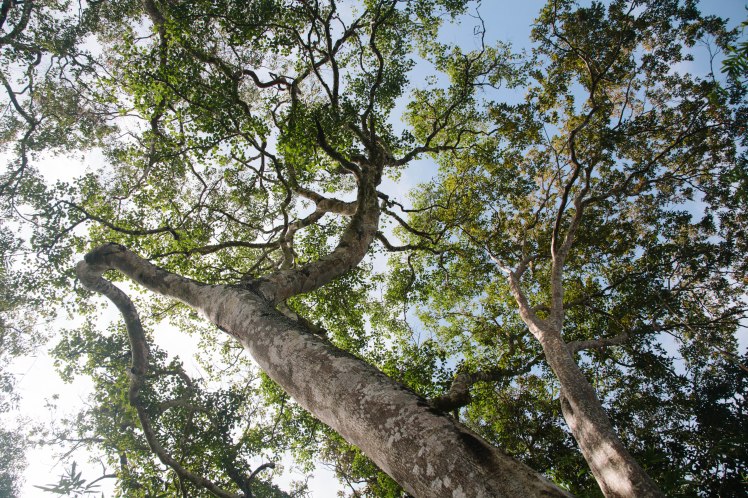 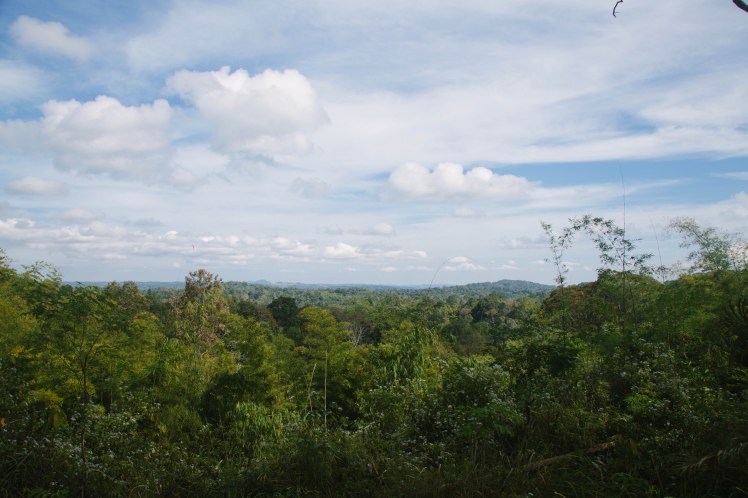 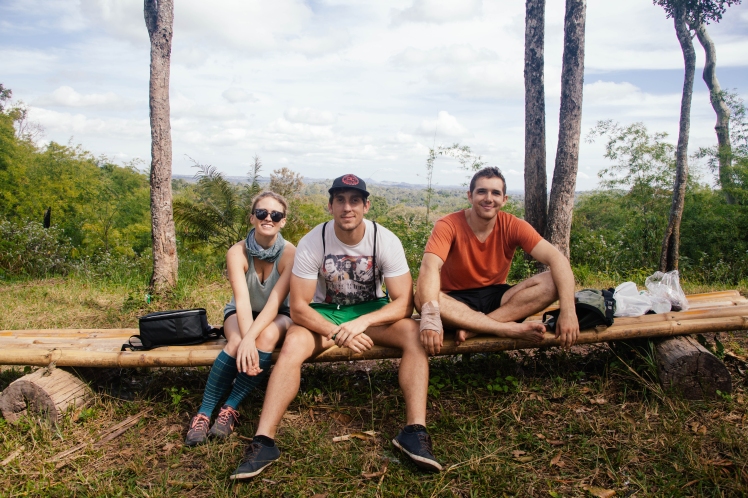 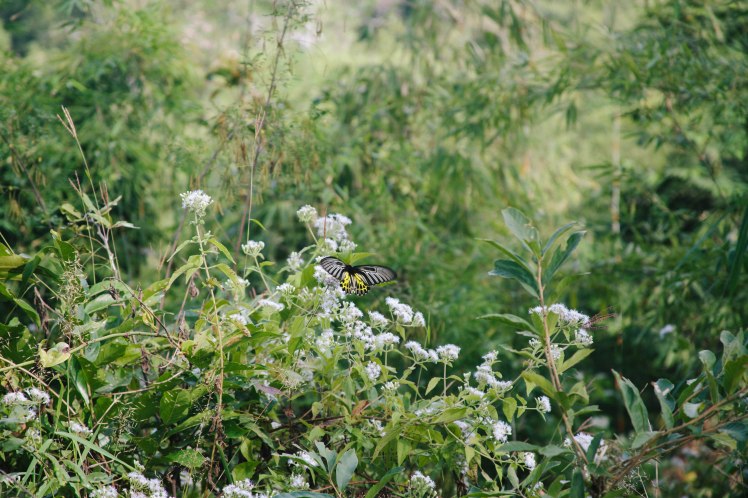 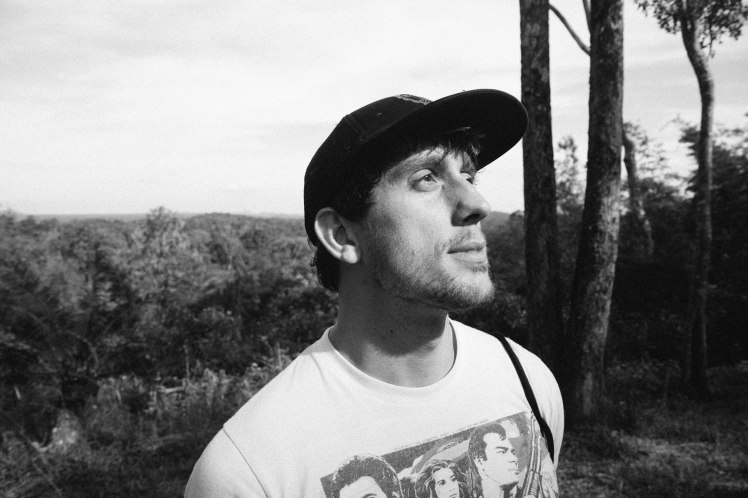 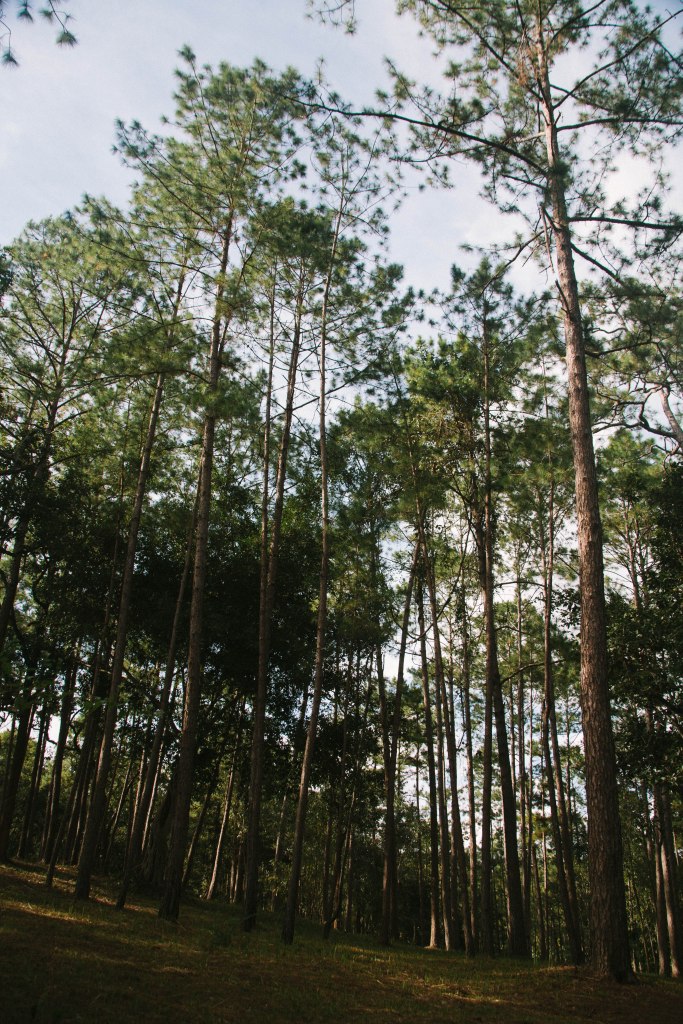 Pine trees in Thailand – who knew?? 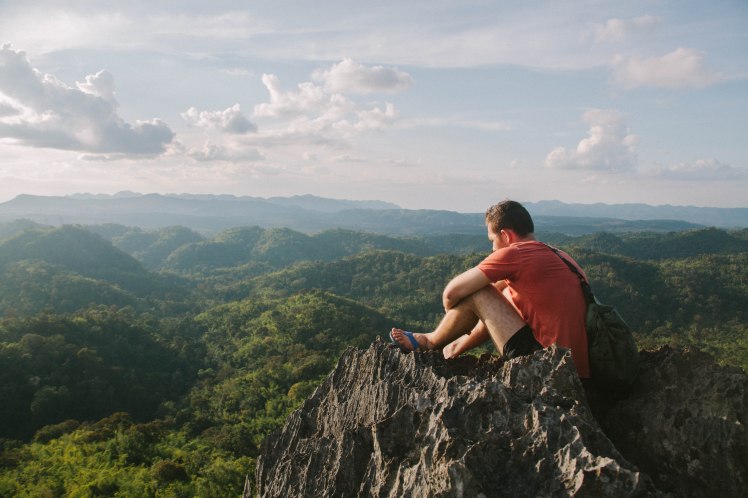 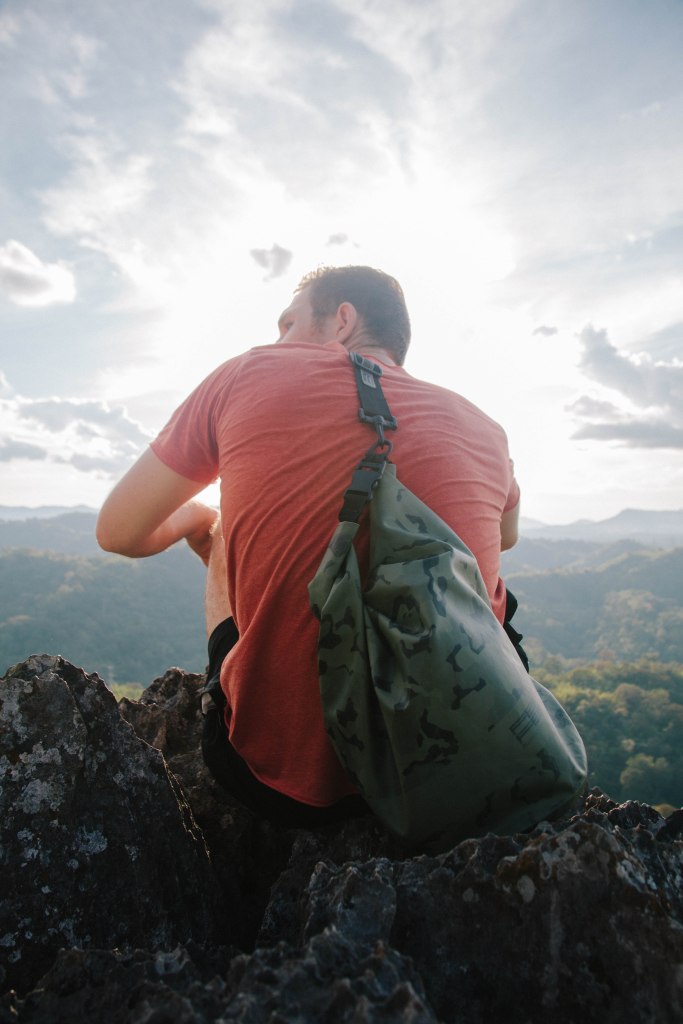 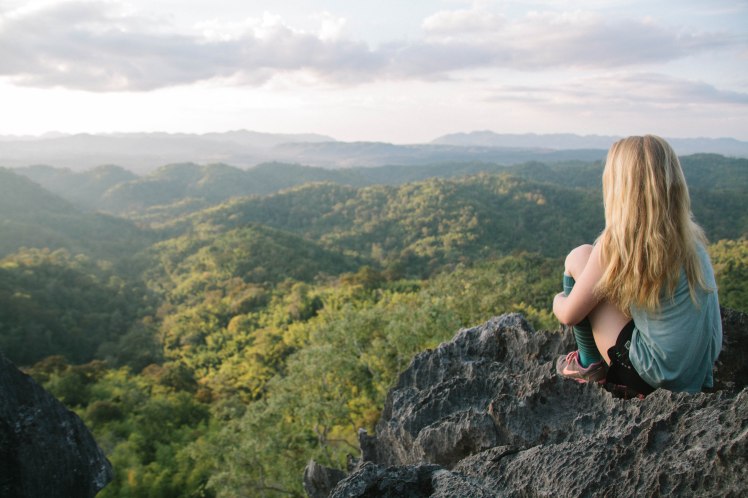 My mother saw this photo and insisted I get a haircut. Fair…I hadn’t had one in a year. 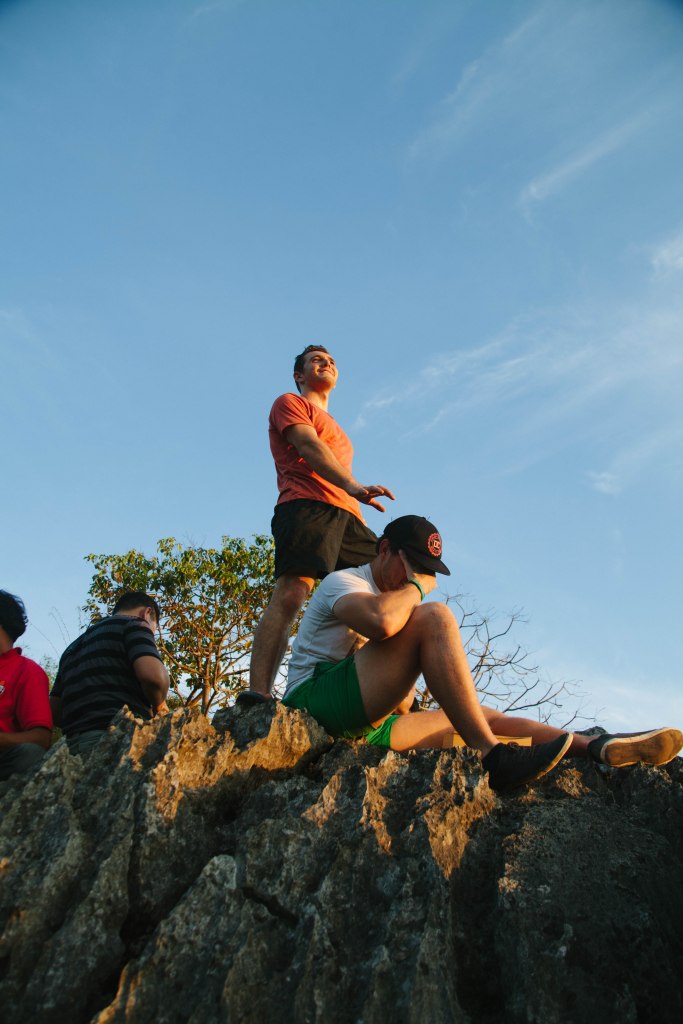 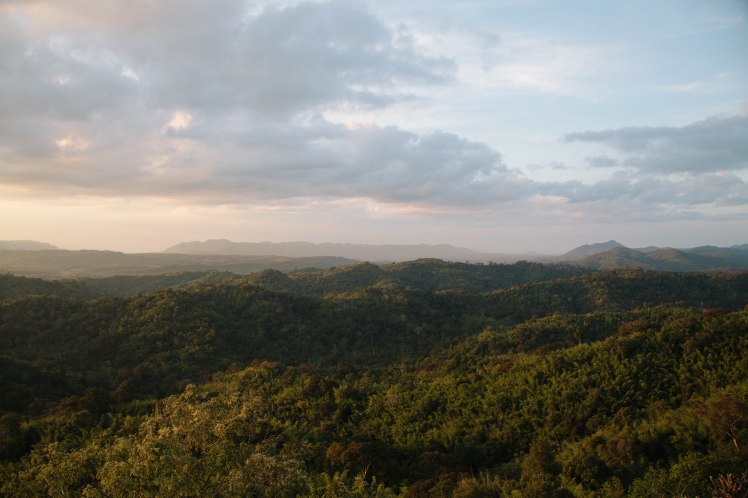 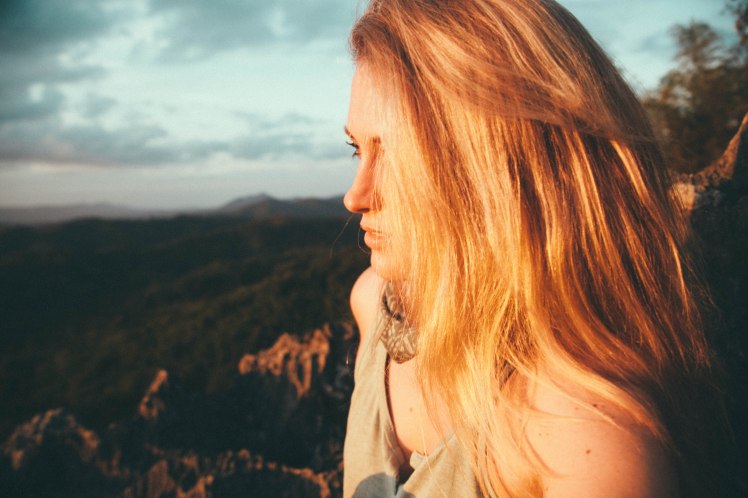 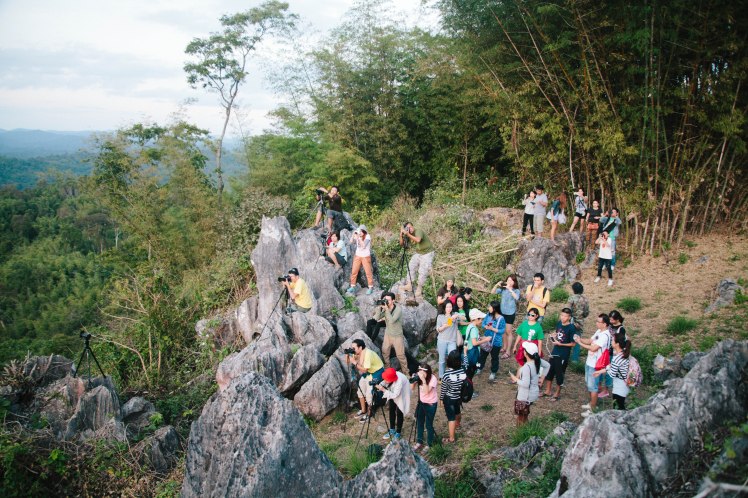 I was happy to have found a perch far enough away from this, however uncomfortable it was. 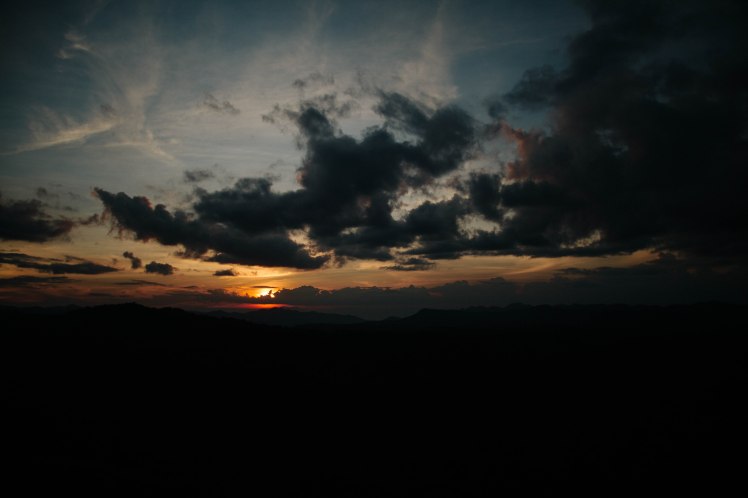 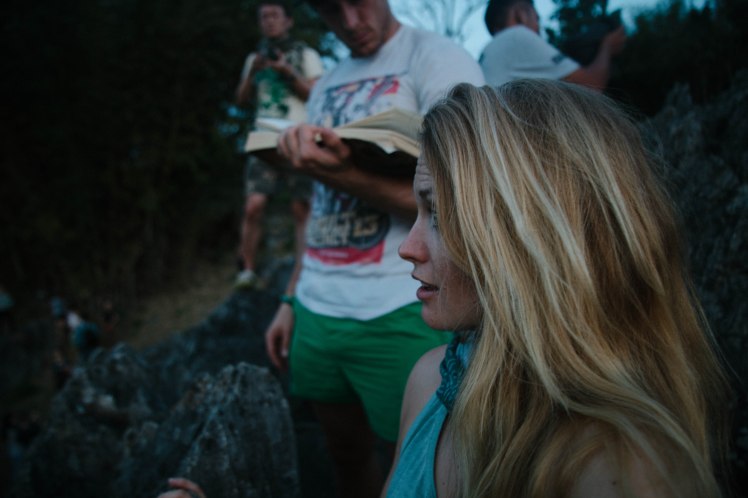 He read that book for the entire sunset.

We woke before the sun and piled into the back of a pickup truck with our blankets to watch the sun rise at another viewpoint. Really kicking myself for not bringing even one of my four tripods. Picture quality is average, at best, but seeing this with your real live eye balls is pretty dang magical. 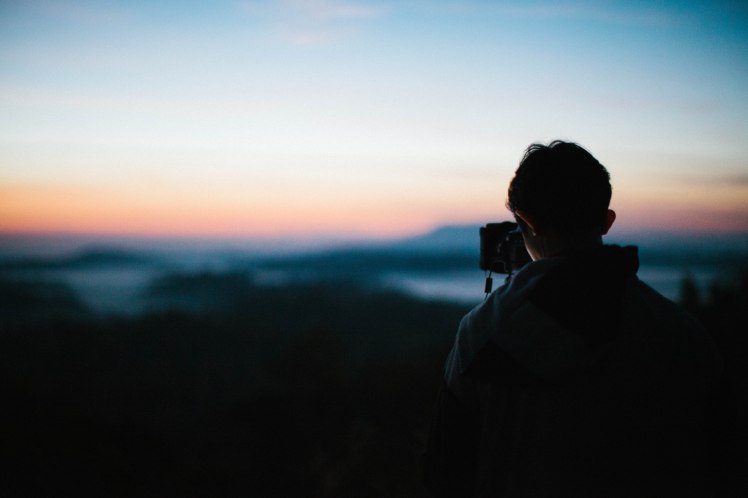 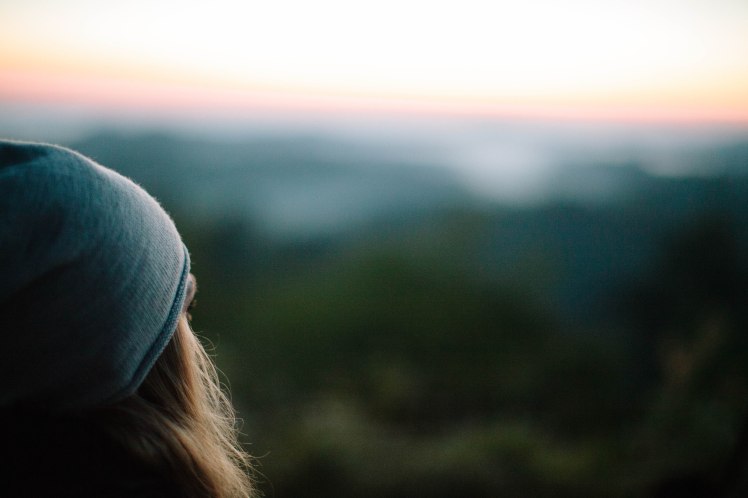 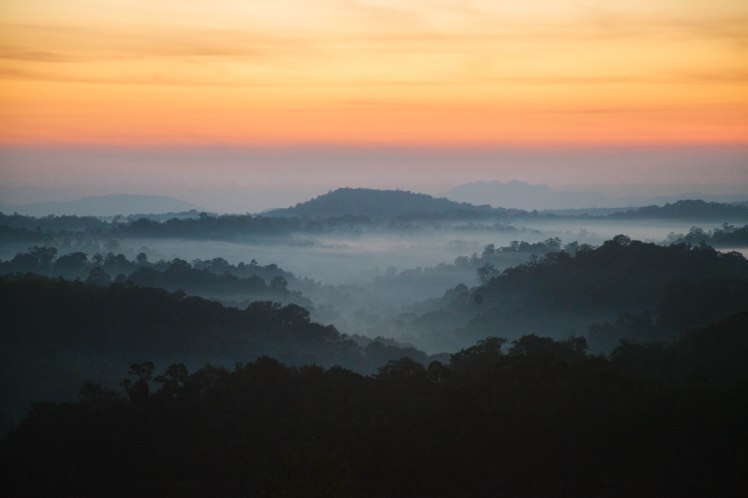 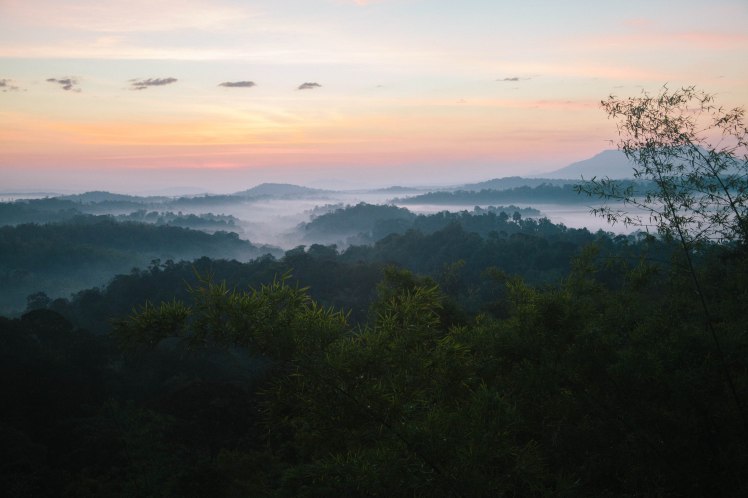 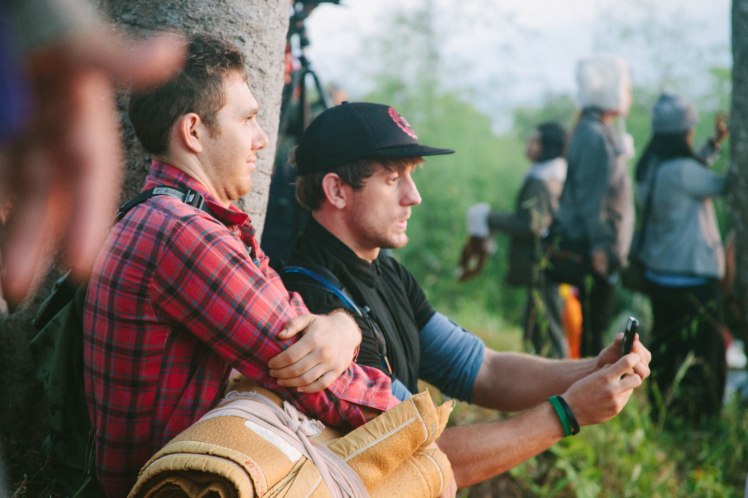 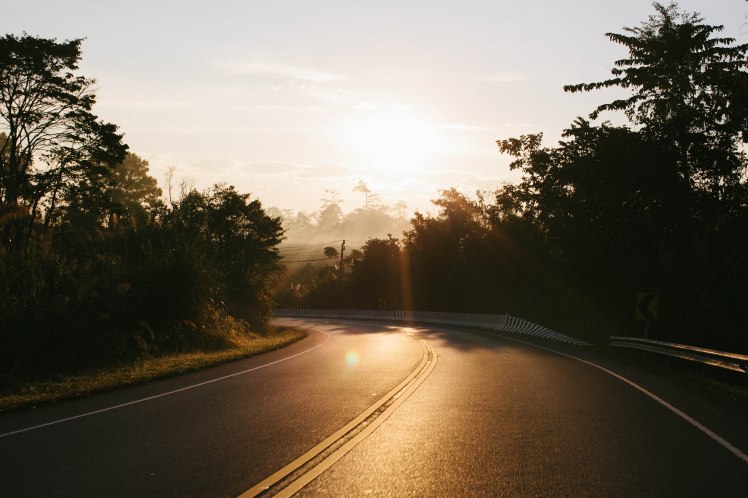 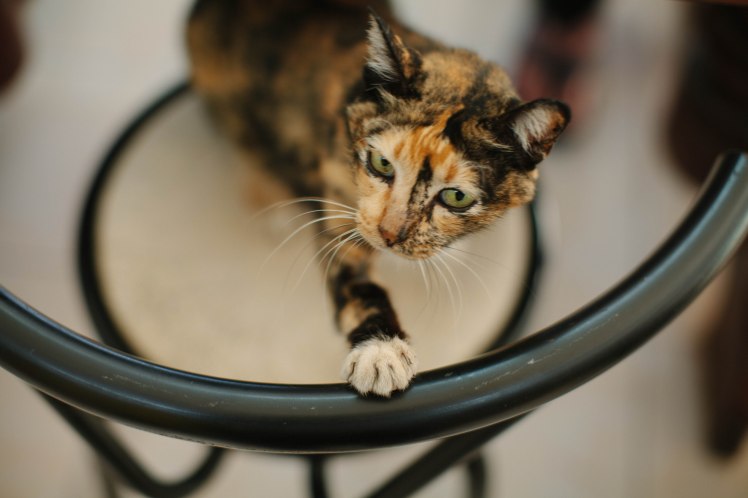 This sweet one curled up in my lap for the duration of our breakfast. Obviously I had thoughts of putting her in my backpack. 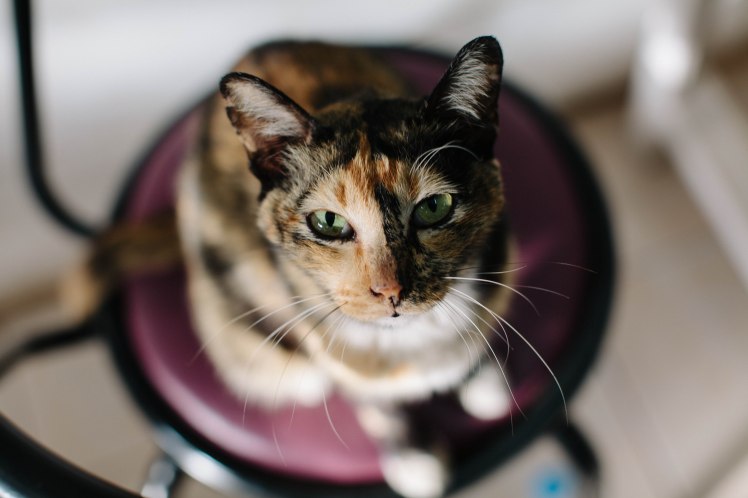 We got lucky on the way out and found a pickup that was willing to take us all the way to the bus station in Lom Sak (instead of walking to the entrance of the park and waiting for who knows how long for a bus to chase down). Headphones in, wind in our hair – back of a pickup is actually a lovely way to see some Thai countryside. In the end, I headed back to Bangkok with my hair in knots, my lungs full of fresh air, and a happy heart. Despite some of the initial letdowns, it’s hard to be mad when you’re wandering around and camping in such a beautiful place. I still prefer those spur of the moment, spontaneous trips – but I suppose a bit of planning and research never hurt anyone. Next time it may help me avoid staying in a “hotel” straight out of a CSI crime scene.

That’s part of the reason we travel though, right? It’s all part of it.